Samba has become the best known form of Brazilian music worldwide, especially because of the country’s carnival, although bossa nova, which had Antônio Carlos Jobim as one of its most acclaimed composers and performers, have received much attention abroad since the 1950s, when the song “Desafinado”, interpreted by João Gilberto, was first released. Instrumental music is also largely practiced in Brazil, with styles ranging from classical to popular and jazz influenced forms, featuring composers like Heitor Villa-Lobos, Pixinguinha and Hermeto Pascoal. 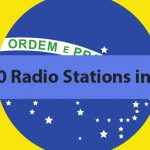