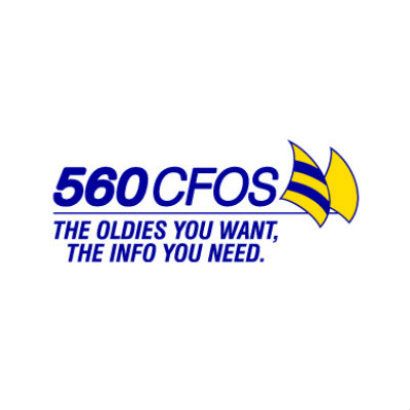 560 CFOS is Canadian Radio station. Enjoy Open Line, Local Church Service, or shows like Sports Talk, in addition to others. They include in their playlist different types of genres like 60s, 70s and Oldies.

CFOS is an AM radio station broadcast from Owen Sound, Ontario, Canada. The format is old, classic adult contemporary music and news (plus an adult standard / nostalgic music show, “Remember When,” several nights a week from 8-11 p.m.) and is marked as 560 CFOS.

CFOS was approved as a network of CBC radio dominion networks until 19262, and was approved with the original CBC radio network for several years until 1983, when CBCB-FM was introduced.

On June 21, 1986, CFOS opened a semi-satellite station at Port Elgin, CFPS-AM, and CFPS was approved by the Canadian Radio-Television and Telecommunications Commission (CRTC) in 2005 to convert to FM band 979.9 MHz.In 1994, CFOS applied to operate a Rebroadcaster, a new operator in Collingwood at 1610 kHz frequency.

This application was rejected on March 8, 1995. In 2007, CFOS applied for the addition of a 96.1 MHz FM signal to re-broadcast the AM signal; The CRTC rejected the application in February 2006.