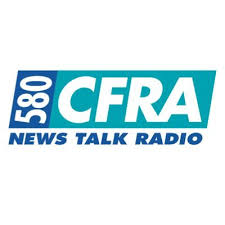 580 CFRA is a live radio station located in Ottawa, Ontario, Canada. It is popular for news, talk, sports, informational and educational programs.

The station was founded by Frank Ryan, who began broadcasting on May 3, 1944, with a 1,000-watt transmitter. In 1962, the station shifted its current frequency to 580 kHz and increased its electricity by 50 kW during the day and 10 kW at night.

Between 1970 and 1984, from 2pm to 5pm on Saturdays, CFRA aired an old show hosted by American announcer and comedian Gary Owens, the first show on Rowan & Martin’s Laugh-in TV show.

It was the title track soundtrack, where the song was requested via postcard at the station for admission for the annual end prize.

CFRA played pop music as Ottawa’s top 40 music station until the mid-1980s, whose popularity and controversial evenings were known to host Mark Elliott in the late ’70s and’ 80s. Elliott was so popular at the top that he was tapped to be a presenter at the 1985 Juno Awards.

One of Elliott’s eyebrow-raising behaviors occurred in 1986 when he was released [1] after switching to the old-fashioned format (see below).

Shortly after competing at CFGO (where his job was spent due to his addiction and immoral behavior), Elliott went into rehabilitation and was able to kick his addictions; He later hosted a talk show on Toronto Radio for people recovering from addiction.