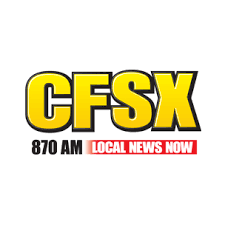 It is founded on November 13, 1964. It is owned by Newcap Broadcasting Inc. CFSX is an AM radio station in Stephenville, Newfoundland and Labrador, Canada, broadcasting at 870 kHz.

Originally launched as a repeater on November 13, 1964, it opened its own studios in 1970. The station is owned by Stingray Group.

It is an affiliate of VOCM. The following radio stations broadcast on AM frequency 870 kHz:[1] 870 AM is a United States clear-channel frequency.

In September 2016, CFSX was shut down by Newcap Radio without any notice. The station is now a full-time repeater of CFCB in Corner Brook, changing its identity to VOCM.

Before then, CFSX operated as a daytime station, and served as a nighttime repeater to CFCB.