Utvarp Saga is probably on the list of very few radios available at Iceland who always implement new forms of programs and explore on what a radio might possibly be and their programming might be. Utvarp Saga always tries to complete their radio programs with many entertainment focused things and always they are listening to their listeners to make a great radio.

Icelandic music has a very long tradition, with some songs still sung today dating from 14th century. Folk songs are often about love, sailors, masculinity, hard winters, as well as elves, trolls and other mythological creatures, and tend to be quite secular and often humorous. Bjarni Þorsteinsson collected Icelandic folk music between 1906 and 1909, and any of the songs he encountered were accompanied by traditional instruments like the langspil and fiðla, which are among the few musical instruments traditionally played in Iceland. Chain dances, known as víkivaki, have been performed in Iceland since the 11th century at a variety of occasions, such as in churches and during the Christmas season. An example is “Ólafur Liljurós”, an Icelandic víkivaki folk song dating to the 14th century, about a man who, while on his way to meet his mother, is seduced, kissed, and stabbed by an elf woman while riding his horse, then eventually dies. 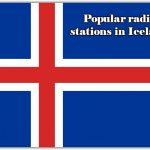 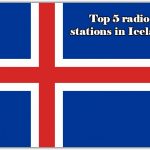