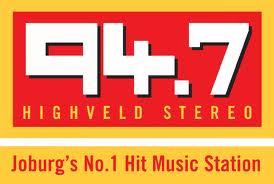 94.7 Highveld Stereo broadcasts a diverse range of locally and nationally produced programs, both music and spoken word, in hi-fi stereo. 94.7 Highveld Stereo broadcasters believe in providing real music variety, so listeners can enjoy a vast catalogue of known and unknown tracks, from Country to Dance, Hip-Hop to Classical, Jazz to Alternative, Rock to Folk, Blues to Ethnic, and much more.

The station first went on the air on September 1, 1964, as the first SABC regional FM service, Radio Highveld. At that time the station broadcast hourly news bulletins and easy listening music. In September 1996 the SABC sold Radio Highveld to private enterprise.

Today this station, along with a number of other radio stations in South Africa, is owned by Primedia.

On 1 September 2014 the station decided to drop the logo that they have been using for over a decade. The station is also no longer known as Highveld Stereo as the name changed to being just 947.

947 is arguably the Gauteng province’s most popular radio station, broadcasting the often controversial Rude Awakening breakfast show, which was hosted by Jeremy Mansfield. The target listener demographic is aimed at 25- to 40-year-olds, and as such the station tends to play contemporary “soft” rock, current pop hits as well as a few classics. 947 also makes a point of giving airtime to local South African musical talent. Other useful services to listeners include news bulletins and traffic reports for Johannesburg and Pretoria.