Apostolic Grace Radio the is broadcasting from UK and is undeniably a very promising online radio for having a very wide outlook on their radio and its future. The radio wants to build up it listeners base by having organize the kind of programs their listeners might find suitable and preferable. 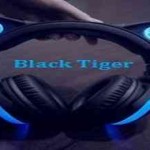