The transmitter and broadcast tower are located north of town at the intersection of Hwy 63 and 230th Street. According to the Antenna Structure Registration database, the tower is 149.4 m (490 ft) tall with the FM broadcast antenna mounted at the 142 m (466 ft) level.  The calculated Height Above Average Terrain is 150 m (490 ft). The tower is also used as the antenna system for its sister station, KMZN (AM). The genre of news as we know it today is closely associated with the newspaper, which originated in China as a court bulletin and spread, with paper and printing press, to Europe. 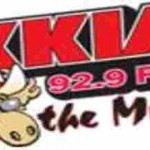