Radio Alto Ave is the news based radio station broadcasting live from Portugal. News on politics, weather, sport, music, highlights, celebrity news every thing is covered. They have got some energetic journalists and everyone is very fond of their unbiased news presentation. 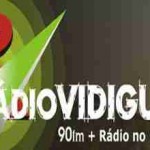