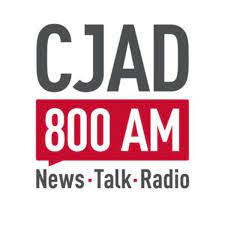 providing the most frequent news updates, traffic reports every 15 minutes and comprehensive weather. It is home to the most well-known personalities in the city including Andrew Carter, Dave Fisher, Aaron Rand, Tommy Schnurmacher, Ric Peterson, Suzanne Desautels, and Barry Morgan.

It also offers extensive coverage of the Montreal sports scene and is the official broadcaster of the Montreal Alouettes, Montreal Impact and The Rogers Cup. CJAD (800 AM) is a commercial radio station operating in Montreal, Quebec, Canada.

The station has an English language news/talk radio format and identifies itself on-air as CJAD 800. Owned and operated by Bell Media, it has a daytime power of 50,000 watts but reduces power to 10,000 watts at night to avoid interfering with other stations on AM 800.

The transmitter is located near Saint-Edouard, while studios and offices are located on Rene-Levesque Boulevard East in Downtown Montreal. CJAD can be heard across Canada on Bell Satellite TV channel 953.

Local hosts are heard throughout the day and evening with a few syndicated shows also carried: Coast to Coast AM with George Noory.

Affiliated with CBS Radio for many years, in 2018 the station, along with many other Bell-owned talk radio stations in Canada, switched to NBC Radio and 24/7 News for U.S. and international news.

CJAD and co-owned 690 CKGM are currently the only two full-time commercial English-language stations in Quebec on the AM dial.

A large part of CJAD’s daily programs are talk shows discussing local and international news. CJAD broadcasts newscasts every 30 minutes, except overnights when newscasts are delivered every hour, on the hour.

Live @ Five is a half-hour news program broadcast at 5 a.m. on weekdays. Traffic updates air every 15 minutes during the day and every 30 minutes late nights.

On weekdays, veteran anchors Andrew Peplowski and Trudie Mason deliver morning newscasts, with Jason Mayoff and Richard Deschamps taking over in the afternoons.

Sofia Misenheimer serves as anchor on weekend mornings, and Nicole Proano takes over from Pipia on Saturday and Sunday evenings.

Overnight news is read during the week by James Foster, who is also a frequent fill-in at the morning anchor’s desk. Longtime anchor and reporter Tom Armour retired in 2015.

On February 2, 2022, CJAD’s newsroom was eliminated as part of a major round of layoffs by Bell Media. CTV Montreal reporters will be expected to file reports for CJAD, and the station’s late-night anchors will read news headlines on CJAD during the evening hours.

It was later announced that Natasha Hall and Aaron Rand’s afternoon and evening shows would be replaced by a co-hosted afternoon show, and that a simulcast of CTV News at 6 would also be added to its lineup.

The cuts were among 210 across the company, which also included a similar elimination of staff at Toronto sister station CFRB .

CJAD is the exclusive  radio broadcaster of the CFL’s Montreal Alouettes. Some game broadcasts are simulcast on sister station CHOM 97.7 FM.