Cyprus has a thriving radio landscape, with 93% of Greek Cypriots tuning in every day. Most stations broadcast in FM, and there’s a mixture of state and private-run stations. This article lists all radio stations broadcasting in the southern part of Cyprus, and overviews the major stations broadcasting from the Northern part of the island (occupied by Turkey since 1974). The British sovereign military bases of Akrotiri and Dhekelia also operate radio transmitters. In addition to domestic broadcasts, Cyprus hosts international broadcast centres beaming content to the Middle East. 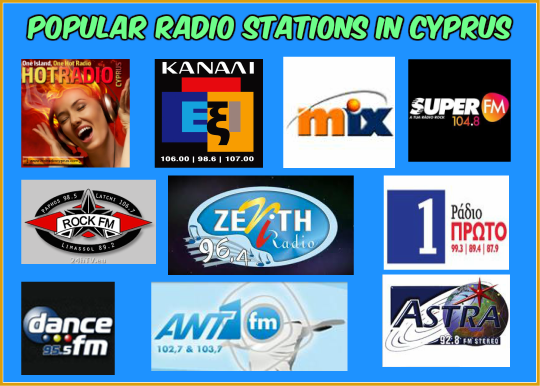 The list of Popular Radio Station in Cyprus are:

Ant1 FM is one of the most famous online radio station on Cyprus. Ant1 FM welcome all of you to the house of entertainment that has been designed to give you the best radio experience no matter wheather you are living in Cyprus or anywhere else in the world. With songs from the popular music artists of Cyprus and from the whole world Ant1 FM is all set to take you to a musical world where you are gonna come again and again.