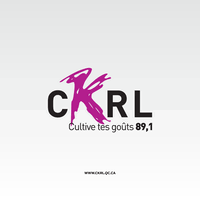 You are listening CKRL 89.1 Fm. It is the oldest French-speaking community radio station in Canada. A pioneer in its field, second FM frequency Quebec CKRL clings to its mission to advance music and citizens. It is broadcasting from Quebec City, Quebec, Canada.

CKRL-FM is a French-language Canadian radio station located in Quebec City, Quebec. The station operates under a community radio licence and is owned by a non-profit group known as CKRL-MF 89,1 inc.

It broadcasts on 89.1 MHz with an effective radiated power of 1,495 watts (class A) using an omnidirectional antenna, broadcasting from Edifice Marie-Guyart in downtown Quebec City.

CKRL-FM began broadcasting on February 15, 1973 at 5 p.m. and was originally a campus radio station for the Université Laval; this situation ceased in 1984, although the name of the corporation remained “Campus Laval FM inc.

for many years thereafter. 94.3 CHYZ-FM became the new campus radio station of that university in 1997. The station is a member of the Association des radiodiffuseurs communautaires du Québec.